Today is National Oatmeal Day, and I thought I’d look at my wife’s oatmeal.  Hers is the most interesting and best-tasting oatmeal ever.
First, she cooks Old Fashioned Oats with cinnamon. Sometimes in the fall, she might add ginger, nutmeg, allspice, and cloves to make a pumpkin-spice like mixture. She uses enough water to cook it, but the oatmeal is still very stiff.
Next, she will put it in a bowl and create a lovely mountain, making the sides steep and create a divot in the center. She then fills the outside with cream to create a moat around the oatmeal. Then, she fills the empty volcano with Bailey’s Irish Cream. 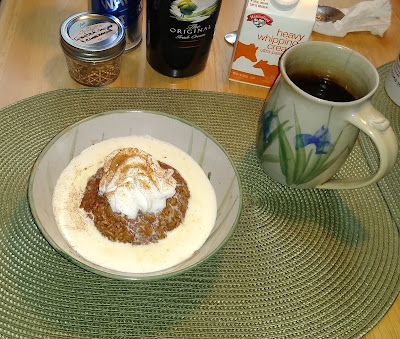 Adding a snowy mountain top of whipped cream adds to the charm. Finally, a gentle sprinkle of cinnamon sugar provides the finished product. It is impressive to watch her build one.
#NationalOatmealDay
Posted by D. Taylor at 4:09 AM No comments:

Because of Covid-19, social distancing, and travel issues, I haven’t traveled at all or done much eating out. I’ve done curbside at several restaurants, but to review them just doesn’t seem right. They are doing the best they can. Because of that, I’ve decided to refocus this blog more on examining the food I’ve prepared than on restaurant foods and experiences. We’ll see how that goes and if it can motivate me a bit.

Background – We spent the day before riding the Cog Railway and stayed in North Conway for the night.  In the morning we looked for a good place for breakfast, and a very good place we found.

Arrival – We arrived at about 9:30 on a Sunday morning and they were busy.  We had about a ten-minute wait before being seated.

Pre-ordering – The server arrived quickly with cups and a pot of coffee right away. We sais yes to the coffee and ordered "waters with lemon," and a Mimosa. The arrived quickly--about the time we were ready to order.

Food – The food arrived quickly and without incident and was amazing. My eggs were perfect with no crackle around the edges, the home-made gravy was among the best I’ve ever had. The home fries were cooked thoroughly and very tasty. My wife’s eggs were perfect. Gordon Ramsey would have said they had the perfect ooze when cut into. The Hollandaise sauce was smooth and tasty. The perfect complement to the eggs.

The check arrived with perfect timing. All-in-all it was one of the best breakfast experiences ever and certainly the best in several months.

Ambiance: 4 (Clean and open, not so noisy, even when busy, and we were able to have conversations.)
Food: 5 (Every item was cooked perfectly.)
Service: 5 (Server was friendly and attentive.)
Price: 5 (Our breakfasts were under $10.50 each, not including drinks, and had plenty of food.)
Value: 5 (A 5-Star breakfast for a one-$ price.)

Conclusion: We really liked Banners and will return anytime we are in the Conway, North Conway area.


It is rare that I think more of something isn’t better, but that was the case at lunch at Nonesuch River Brewing.

My wife and I arrived at an off time, about 3 PM, and were two of about eight customers in the restaurant. To get things started, we ordered drinks and an appetizer of thin onion rings. The onion rings came with a chipotle aioli drizzled on the top along with fresh slivered scallions.  I liked the scallions; they were flavorful. The chipotle aioli was tasty. I wish it had come on the side rather than on the onion rings because the aioli did an excellent job of off-setting the greasy onion rings – and they were greasy. It was one of the few times that we didn’t eat the entire order of onion rings.

Before we finished our appetizer, our sandwiches arrived. My wife got the Backyard Farms Tomato BLT with a mixed green salad; I ordered the Beer Battered Haddock Sandwich with garlic fries.

Both sandwiches came on delicious ciabatta bread, toasted nicely. It is March, and although Backyard Farms Tomatoes promotes that their produce is good year-round, the tomatoes on her sandwich weren’t quite ripe. Also, there were two strips of thick cut bacon.  The bacon was thick and tough to bite through. We would have preferred thinner bacon, but more of it.  Likewise, my Haddock Sandwich came with a huge thick chunk of fish.  A thinner, but broader, piece that would have fit the bread, and my mouth, would have been much better. The coleslaw was okay, but there was too much tartar sauce for the sandwich. They should have served the tartar on the side.  The garlic fries were plain fries where someone apparently squeezed some minced garlic out of a jar and then mixed the fries slightly. They still had several clumps of garlic stuck together and weren't mixed throughout the serving. They weren’t worth the upcharge.

The seating was hard wooden benches along one wall with hard chairs across from them.  Shortly after we sat down one of the wait people started moving the tables and chairs on that wall into a configuration they wanted them in.  Ten minutes later, a different staff person moved the table and chairs back to where they had been. I found the constant moving of tables and chairs around us interruptive and unnecessary.

I found the food pretentious in a beer pub environment. The price was also high for pub food. An $18 haddock sandwich and a $15 BLT should be amazing; they were not. I doubt we’ll be back.

Ambiance: 4 (Clean and open, probably very noisy when they are busy.)
Food: 3 (Bacon was too thick, fish thicker than it should be and had too much tartar sauce.)
Service: 4 (Server was friendly.)
Price: 3 (Lunch was about $17 each, not including drinks)
Value: 3 (I thought the food wasn’t up to the amount charged.)

Nonesuch River Brewing has a mug club and brews eight different beers from an IPA to a Stout. I did not sample the different beers and did not have an opinion about NRB's various beers.

While I was in Minnesota, one of my good friends suggested G’s Café in Anoka for breakfast. It was a bit of a drive (about 10 miles) from Ham Lake to Anoka, but the food and service were well worth the trip.

We arrived a bit later than the typical breakfast time and the Café only had a couple other patrons so seating was easy. We ordered coffee and began reviewing the menu.

G’s has an Irish theme to the restaurant. Because of that, I decided to try the “Irish Skillet” – Fried corned beef with hash browns, onions, green peppers, and tomato. Topped with two eggs and Hollandaise. It was served with toast, but I opted for the English muffin. My companion settled on 2 eggs over easy with bacon and a pancake. 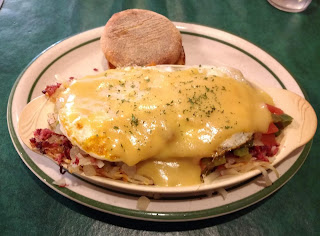 My skillet was one of the better skillets I’ve ever had. Clearly, the hash browns were started, then the corned beef was added. Then the onions and peppers, finally the tomato was added to warm them but not make them soggy and overcooked. The tomato added a brightness to an otherwise rich dish. The eggs were as expected, but the Hollandaise sauce was amazing. Very flavorful, rich but light, smooth and creamy. There was enough corned beef to taste it but not so much as to overpower the rest of the ingredients. 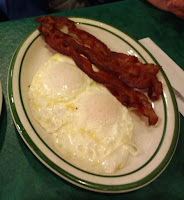 My companion’s bacon was beautiful – crispy and long, exactly the way he likes it. The eggs were a perfect over easy and his pancake was good.

Service was excellent. Our server anticipated our needs for more coffee and condiments.

Ambiance: 4 (Clean and open, good for conversations.)
Food: 5 (Every item was cooked perfectly.)
Service: 5 (Server was friendly and attentive.)
Price: 5 (Breakfasts average under $10, not including drinks)
Value: 5 (I really felt it was great food at a reasonable price with excellent service.)

The only detraction is that parking can be difficult in downtown Anoka. There is on-street parking along Maine Street and there is a small lot with space for about a dozen vehicles next door. As a last resort, there is a municipal lot about a block and a half away that offers free parking for three hours.

I liked it. I will definitely return anytime I’m in Anoka. Hopefully, next time I’ll be there for lunch and can try their Reuben, it looks yummy.